People and Their Future 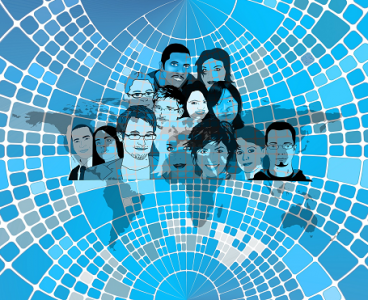 The future is a peculiar place, in that it often seen as uninhabited, like a chessboard, where if a series of strategic moves occur, the responses will predictability be this or that. In other words, if people are involved, we all already know how they will react. Perhaps that mindset arises by the enormous amounts of attitude/motivation-related data now being collected—as Edward Snowden reports in his memoir, Permanent Record—with that outcome in mind. But of course Snowden himself is an example of how the actions of a single person can lead to cultural sea changes.

More interesting is people’s response to change in general, especially those changes they perceive as unsettling or threatening, as a loss and not a gain. One type of change trend is an increase in fear of diversity. Thomas L. Friedman’s soothing vision, in The World Is Flat, of conflict reduction through globalization seems to have been replaced by a claustrophobic sense of being hemmed in by “others.”

Donald Trump aside, the rise of intolerance could be seen as a catalytic response to cultural shifts that were previously unheeded or even ignored by those most likely to be affected by them until these shifts were pointed out to them. The role of the media is usually mentioned here, but the interlinking of modern life goes beyond that—and not everyone likes it.

In the arena of technology assessment, the actual changes wrought by new technologies, either immediately or years later, can be quite different from what their developers had anticipated. Part of that difference involves innovative utilizations in the marketplace, part involves unexpected enabling in other arenas not initially seen as related to those innovations, and part results from negatives impacts on economies or previously unconsidered stakeholders.

Finally, the growing and rather overwhelming accumulation of behavioral and attitudinal data remains limited to its basic historical nature—what was previously done, in what circumstances. In contrast, the evolution of circumstances or shifts in zeitgeist seem to add unpredictable factors. While these can be termed cultural elements, they always involve people and their emotions, including fear, greed, lust, and love. While quite a bit of work is being done on the cognitive mechanics of behavior (brain science), it is still not a reliably predictive science.

Certainly, foresight literature is packed with best laid plans gone wrong. The astounding “rebuilding” in 1989 of Douglas Aircraft—a company whose chief failing was its independence from its McDonnell Douglas parent—without input from Douglas Aircraft leadership is a classic example, which led to what the Los Angeles Times called “a sea of red ink.”

My personal experience includes being asked to speak to an auditorium of Bell Atlantic employees about a brainchild management innovation called the Bell Atlantic Way, which was experiencing major pushback. Ultimately, it was not clear that my words had much impact, as the damage had already been done, with no cross conversation in sight.

But foresight misunderstandings are not always clear responses to the poor implementation of change initiatives, few of which are actually designed with the input of futurists. In contrast, they can be the result of unexpected cultural currents already in place. I have spoken in the past about addressing a senior management group from across the United States about the future of communication technologies, only to discover in Q&A that their major concern was how to respond to coming economic, social, and political disaster—which now seems quite prescient.

Even personal styles and messages can produce quite dramatic results. I am reminded of a story Joe Coates told about his experience with a Midwestern corporation, where he was asked to speak at a board meeting. He had dinner the evening before with the board chair and outlined his assessment of where the company was, where it should be going and how it could get there. At the end of the dinner, the board chair said, without explanation, “Don’t bother to come to speak tomorrow, as the board will not want to hear what you have to say.” It was, in other words, a clash of cultures, world views, and personalities.

In retrospect, it appears that knowing your audience (or its stakeholders) is just as or more important than understanding sector dynamics or the basic mechanics of change. In addition, the manner in which people may affect and influence one another seems essential. Change can be quite terrifying if there seems no place for people (or the individual) in its planning. Understanding both the aspirations and the fears of stakeholders before moving ahead on plotting the future seems essential as we increasingly encounter “troubled times.”

Timothy C. Mack is managing principal of AAI Foresight Inc. and former president of the World Future Society (2004-2014). He may be reached at tcmack333@gmail.com.