The report, 10T415 (Ten Trends for 2015), provides a rich assortment of examples for the trends, as well as incisive forecasts based on the research analysis.

–BAUTISTA– is a research and marketing consulting firm that tailors strategies for clients working in Latin America. To request a copy of 10T415 (Ten Trends for 2015), which is available in English or Spanish, please contact Luis Carlos Chacón: luiscarlos@bautista.la or Juan José Baute: juanjose@bautista.la 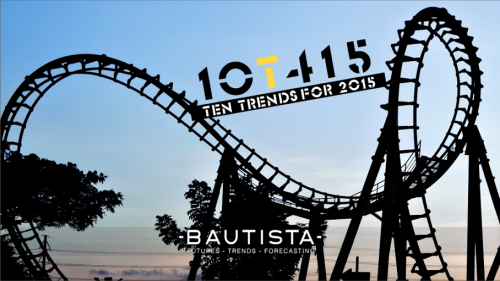 How to Test Climate Change Solutions

Geoengineering projects aimed at solving climate change problems might seem too big to test. After all, the earth and its atmosphere are mighty big fields in which to conduct experiments.

Researchers at Harvard School of Engineering and Applied Sciences are now pursuing a small-scale experiment for testing such risky approaches as solar radiation management (SRM). The proposed experiment would involve small amounts of sulfuric acid (about the amount that a commercial aircraft releases in a few minutes of flight in the stratosphere) to determine the effects of SRM on radiative heating, water vapor concentration and movement, and the risks of ozone loss.

The researchers hope to provide better, science-based information for policy makers, according to project leader David Keith, the Gordon McKay Professor of Applied Physics at Harvard SEAS and a professor of public policy at Harvard Kennedy School.

“There is a wide range of experiments that could be done that would significantly reduce our uncertainty about the risks and effectiveness of solar geoengineering,” Keith said in a press statement. “Many could be done with very small local risks.” 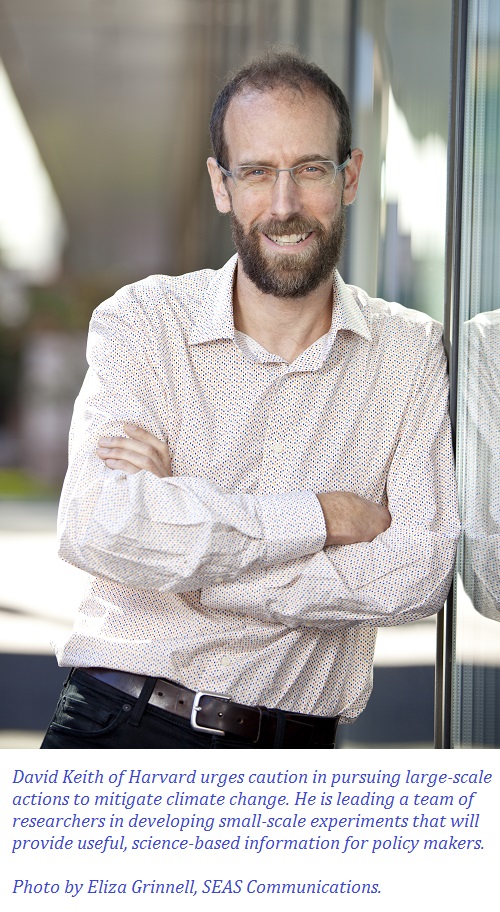 When Not to Take Smart Pills

Who doesn’t want to be smarter and more creative than they already are? Students at exam time are especially drawn to so-called smart drugs that offer hope for enhancing cognitive performance or creative thinking.

The smart-drug solution might backfire on healthy students, however. Research recently published in PLOS ONE showed negative effects on healthy subjects using the popular drug Modafinil.

The randomized double-blind study, conducted by psychologist Ahmed Dahir Mohamed at the University of Nottingham Malaysia Campus, used the Hayling Sentence Completion Test, which tasked participants to respond quickly and accurately. Mohamed found that, when the task required instant responses, the drug increased participants’ speed but impaired accuracy. Similar results have been found in tests for creative thinking.

It is important to note that these results were for healthy test subjects. Modafinil or other performance enhancers may yet be valuable for those who fall in the lower end of the spectrum for cognition or creative thinking, or for adolescents, whose brains are still developing. However, Mohamed’s future research will focus on nonpharmacological solutions, such as meditation, exercise, and diet. In my strategic briefings around the country, I routinely ask my audiences (largely managers and professionals) whether they have heard the term “Big Data,” and most of them raise their hands. But, when I ask how many of them know exactly what “Big Data” means, almost no hands go up.

The term is clearly riding a rising “hype cycle,” as reflected by a report in the July 24, 2014, issue of InfoWorld Tech Watch: “A recent survey by Gartner, the IT research firm, found that 64% of large enterprises are investing in ‘Big Data,’ but also found that a similar chunk of firms (60%) don’t have a clue as to what to do with it.”

This apparently indiscriminate management enthusiasm for Big Data can be forgiven (at least in part). Big Data boosterism has been intense. One keynote speaker at the 2012 Davos World Economic Forum proclaimed that “Big Data is a new class of asset, like currency or gold!” Later that year, Gartner forecast that, by 2015, Big Data “would directly generate 1.9 million new jobs, and indirectly generate 5.7 million additional new positions.” Read more.

It is often stated that productivity-enhancing technology may eliminate jobs, but innovation will create more. The experience of Réunion Island in the Indian Ocean offers an illustration and test case for this principle.

AAI Foresight recently had the opportunity to assist some regional business leaders in exploring the Indian Ocean’s widely presumed potential for rapidly becoming a powerhouse of economic, social, cultural and political development. In fact, the Indian Ocean is truly poised to be one of the twenty-first century’s leading strategic theaters as a crossroad of global trade and economic growth, as well as potential crises.

Over the next 20 years, several areas of uncertainty will accompany the rapid social, cultural, technological, and geopolitical changes expected throughout the Indian Ocean region. This transformation will be enhanced by extraordinary growth in a range of technologies, especially in renewable energy, food science, and biotechnology.

Unfortunately, these projected increases in the outputs of industry, agriculture, and fisheries, as well as rising levels of consumption worldwide, are already exerting environmental pressure on the ocean. All nations must find means to reduce the environmental impact of this economic growth and its byproducts, so that development activities can meet present needs without compromising the ability of future generations to meet their own challenges. Read more. Excerpted from “The Indian Ocean: Growth and the Jobs of Tomorrow” by Timothy Mack, AAI Foresight Blog (November 23, 2014).

Newsmakers: Edward Gordon, Thomas Frey, and State of the Future

In an interview with the Desert Sun, Dr. Edward E. Gordon, author of Future Jobs and president of Imperial Consulting Corporation, was lauded for his efforts to promote rational approaches to the current jobs crisis. At issue is the surplus of workers and shortage of skills—not just in the United States, but around the world, creating a global talent competition. Read “Unfilled Key Jobs Crisis Takes on Worldwide Proportions” by Morris Beschloss, Desert Sun, November 18, 2014. Picking up on the theme of turmoil in the world of work, DaVinci Institute President Thomas Frey predicted that technological disruptions from such innovations as the Internet of Things will eliminate billions (yes, billions) of jobs in the next 15 years—but will also create countless new occupations. His presentation for Rockwell Automation’s Process Solutions User Group was covered in the industrial engineering journal Control. Read “Opportunity, Upheaval Ahead in Technology-Driven Future” by Jim Montague, Control, November 17, 2014.

“For better and for worse, there is nothing quite like The Millennium Project, an awesome but unwieldy distillation, of trends, forecasts, and proposals largely concerning 15 Global Challenges,” writes Michael Marien in his extensive and detailed review of 2013-14 State of the Future, the September 2014 book of the month at Global Foresight Books. This 17th edition of SOTF was written by Jerome C. Glenn, Theodore J. Gordon, and Elizabeth Florescu, the director, senior fellow, and director of research, respectively, of The Millennium Project.

Marien, perhaps best known as the longtime editor of Future Survey, offers a balanced but sharp assessment of the volume in his review, scheduled to be published in the Winter 2014 issue of World Future Review: “There is much to commend this ambitious overview, but much to question,” he writes. While praising the content of the report, he warns that “the presentation leaves much to be desired.” Read the full review here.

Hazel Henderson (via e-mail): We at Ethical Markets Green Transition Scoreboard® track only biofuels that do not compromise food supplies and are sustainable, such as from algae grown on seawater. Kelp is a nutritious food for humans, as in Japan and elsewhere. The Norwegians are on the wrong track here! See the Masdar Institute’s work with Boeing in our February 10, 2014, report.